Samuel Grant’s Richard Knight and his team are lacing up their trainers to raise essential funds for a revolutionary cancer treatment. Six-year-old Eden was diagnosed with stage 4 neuroblastoma in April 2021 and faces a long road ahead.

Richard, whose children attend the same school as Eden, has committed to a 22-mile walk to support Eden’s cause. The money will go towards a revolutionary cancer treatment which improves survival rates and reduces the chances of relapse.

The treatment is currently only available in the USA, and costs more than $210,000 (£155,000). To help Eden’s fight, Samuel Grant Packaging is matching all Richard’s funds raised for Eden – with his current total standing at £5,300.

The Gardens of Eden tour

Area Sales Manager Richard will join five friends from local rugby club Underbank Rangers to walk 22 miles for Eden. The walk will start at Scholes Cricket Club on Saturday 12th February. The gents will join hundreds of others united in their fight to fund Eden’s treatment.

Richard said: “Before she became too poorly, Eden attended the same school as my two boys in Holmfirth.  Her story was very close to home, particularly when I consider my sons, Jax and Blake.

“When I sat back and thought about what her parents must be going through, I thought I would join the walk and ask for donations. There’s nothing in the world I wouldn’t do for my children, so I thought it was the least I could do for Eden and her family.”

The circular route will finish at Scholes Cricket Club, and has seen sponsorship support from organisations including KG Bathrooms and Project Sport. Samuel Grant Packaging has a pledge to match all funds raised by employees towards charitable causes, and looks forward to matching the donations to help get Eden to the United States.

Add your donation to Eden’s cause

Six-year-old Eden’s journey has been long and harrowing, but she has always stayed smiling. So far, she has had 14 rounds of chemotherapy, with parents Jen and Lee by her side. If you’d like to support Eden’s Army, you can visit Richard Knight’s JustGiving page here.

The Gardens of Eden tour will commence from Scholes Cricket Club on Saturday 12th February. You can donate here. 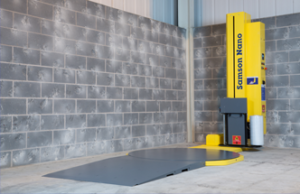 «"Logistics road safety: how are we helping?" "VACANCY: Buyer" »